Heroic Tourism, a local Adelaide conservation venture run by Jessie Panazzolo and Shannon Moulds, was proud to focus its first event in 2018 on the plight of dolphins in the tourism industry. 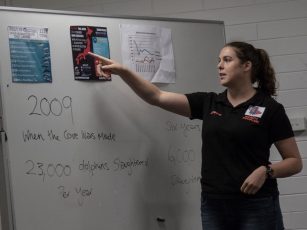 Since 2014, Heroic Tourism has been running as a global initiative to promote positive ethical alternatives to detrimental tourist ventures for wildlife. The event featured a screening on 7 March 2018 of The Cove, about Ric O’Barry’s investigation into the dolphin industry and the impacts that capturing dolphins has on captive individuals, wild populations and the health of Japanese citizens. After the screening, we held a discussion to find out how much the attendees knew about dolphins in tourism, what shocked them and what they had learned from the event.

Here are some reactions:

It’s important to see these things even if you know about the situation, to truly understand the enormity and make that emotional/cognitive connection. Humans (the ones in power) are motivated by greed and have an incredible amount of cognitive dissonance and or willful ignorance. You’re either an activist or an in-activist.

That dude’s persistence to make a change- proved to me that individuals can make a difference. Also how much exposure and understanding can impact an issue – we all need to share as much info as we possibly can!

I had no idea about how dolphins were being treated and mass murdered for no reason. Like I was aware that, yes, captive animals have a lower quality of life compared to wild animals in their natural environment, but I assumed that places like SeaWorld took care of its animals. Now I wonder how many other animal related attractions take terrible care of their animals!

After watching the documentary, 100% of attendees said that they cared more about dolphins in the tourism industry and 78% of people said that since the event they are more inclined to see animals in the wild rather than in tourist facilities.

On Saturday 10 March 2018 we hosted an excursion to swim with Adelaide dolphins on the Temptation sailing boat. We saw two species of dolphins, the local residents, Bottlenose Dolphins as well as the migratory Common Dolphin. It was shocking to hear that Bottlenose Dolphins can live up to 60 years in the wild, but only live up to five years in captivity which just goes to show that being a tourism hero can add 55 years to a dolphin’s life!

If you want to get involved with Heroic Tourism and our future events, please check our website www.heroictourism.com or our Facebook page for updates. Our next event, Education for Elephants on 20 April 2018, in aid of SA Youth Week, will focus on elephants in the tourism industry.

Thank you to Sustainable Communities for supporting this event and we look forward to working with them and a brand new lot of Tourism Heroes in future!