Sustainable Communities has hosted two talks recently on the microbes found in our soil: the first, at the One Planet Market in May, focused on the diversity of fungi; and the second, a Grow Grow Grow workshop in Unley covered what makes soil so productive, and needing to be treated with care. They fit into a growing awareness of the importance of microbes and their role in biological interactions.

The sheer diversity and abundance of microbes on this planet is astounding. A gram of soil contains thousands of species of microbes. I’ve known that bacteria can exist in many harsh ecosystems around this planet, but I was surprised to find out that fungi too have been found in extreme places such as deep ocean beds, in thermal springs and high in mountain ranges. 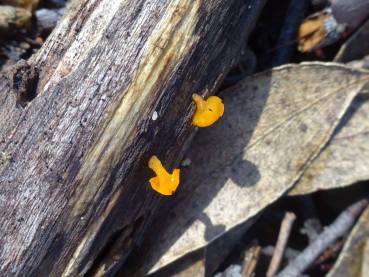 Fungal networks link plants in a ‘wood wide web’ as it’s being called. The network allows plants to share nutrients and information. The mushrooms we see popping up in our lawn or in bushland are the fruiting bodies of the fungi. Much like the tip of an iceberg, they are just a minute part of the much denser fungal strands that can form beneath the earth’s surface

Peter Wohlleben mentions in his book, The Hidden Life Of Trees, finding a tree stump still displaying signs of life. Investigation revealed that the trees around were still supplying it with sugars and other nutrients long after it had lost the capacity to produce its own food. They were able to do this using the fungal networks that link plants. These
networks also allow plants to transmit signals about attack by pathogens, allowing the trees to produce defensive chemicals before they are attacked. 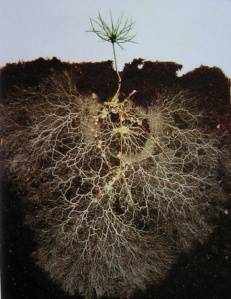 Unfortunately the current obsession with anti-bacterial ‘cleaning’ agents and use of synthetic fertilisers and herbicides have detrimental effects on the rich microbial life present in our planet. The overwhelming majority of these microbial species are not harmful to humans, and many are vital for our survival. Think of the bacteria that make their home in our digestive tract. Without the symbiotic relationship we have with these bacteria we would not be able to extract the necessary nutrients from the food we eat. Similarly plants have evolved symbiotic relationships with a range of fungi that enables them to access nutrients such as nitrogen, phosphorous and sulphates. As we begin to understand more about the aliveness of the ground we walk on, the more it becomes apparent that we need to be more careful of what we do to it.

A healthy underground web is vital for a resilient, healthy above ground plant community. Our planet may seem big but when you take out all the oceans and land that can’t be cultivated (deserts, Antarctic etc), then we are left with a relatively small part of the earth that we can grow food on – just 1/32 of the planet is what some statistician has calculated! All this speaks to the importance of treating the soil with care and being mindful of what we put into it. A quick fix now that kills a pathogen or produces quick growth, might actually be more detrimental in the long run if it also destroys the beneficial microbes in the soil.

If you want to learn more about the local fungi the FungiMap is a good place to start.

The One Planet Market has a speaker every month and the Grow Grow Grow Your OwnGroup runs a series of workshops on various aspects of local food production. See our Facebook page for event details.