By Pat Wundersitz (with Anne Wharton and Anne Wilson)

I was interested to read the blog by Sustainable Communities member, Malcolm McDonell A Sustainable Community – Adelaide: a policy suggestion on 22 December 2015. Without more detail on this proposal, I found some worrisome features in Malcolm’s blog. He is right of course to set us thinking and questioning our future water resources.

The water allocations made to the Australian states were done on projections of higher rainfall than we have seen in recent years. ‘An embargo on issuing new water entitlements for irrigation has been in place since 1975. A system of transferring water entitlements between farms was introduced in 1983, which has allowed increased water usage in some areas’[1]. Hence the awful anomalies which arise now.

It is not just SA which is enduring low water supplies – the Macquarie Marshes which are a big breeding ground for birds, are declining too. I could never understand the sense in allowing a water right to be part of one’s personal estate. I felt we went the wrong way and now it is going to be so difficult to rectify.

Jared Diamond, eminent scientist, teacher and author, discussed in Collapse: How Societies Choose to Fail or Succeed the decline of soils and civilisations in ancient times where irrigation had been employed to grow food for expanding populations. 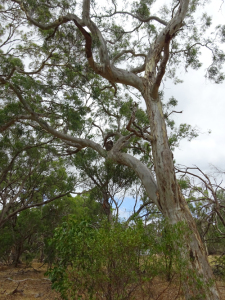 But in defence of Eucalypts: Eucalypts are the pumps of the soil. They use water, but they are far preferable to the exotics which have spread out along our riparian lines. These, such as water-loving introduced plants such as water hyacinth, lypia (see also Lippia) and the willow are threatening the biodiversity and function of the Murray, our main supply [2]. But river red gums, while favouring our watercourses and taking up water in doing so, enhance biodiversity, and also serve to decrease salinity levels by pushing the water table deeper into the soil, not allowing excess salts to rise to the surface and increase soil salinity levels. Eucalypts are renowned for this ability.

For example, when the River Red gums were felled in the Mount Pleasant area in the 19th century to supply timber mills in the area, slowly the soil salts rose in the discharge areas. In the late 20th century a cherry orchard was established on the flat country (discharge region) east of the local ranges. The orchardist lost 25% of his cherry trees which were grown on imported rootstocks. He then grafted some varieties on the more salt tolerant Mariposa plum. Also, when the Eastern hills were being assessed for a water management program, each little stream and ephemeral riverlet was mapped and tested, and these watercourses showed elevated salt levels.

Eucalypts are particularly adapted to fire, and have evolved to survive in a diversity of environments throughout Australia. When fire damages vegetation, eucalypts can regenerate in two ways – from lignotubers and from epicormic growth. (Lignotubers are woody swellings in the root crown, and give plants the resilience to regenerate after fire: buds can sprout and grow below ground and stems can form. Epicormic buds lie under the bark on trunks and branches, remaining dormant until the tree is damaged)[3].

The flora of this state has adapted after years of variable weather conditions. Many grasses can remain green in summer (Microlaena, Kangaroo and Wallaby grasses), or in prolonged dry spells retain a few green shoots. Providing grasses are grazed so that enough green shoots remain to photosynthesise, they provide stock feed and soil anchoring capacities. When these grasses are grazed, some roots are shed underground. These rot away and form tiny channels for water to percolate into the soil. Those working with native grasses in Australia recommend using native grasses to funnel water into the soil, thus preventing scouring in heavy rainfall events.

My feeling is that we should consider and utilise the advantages provided by our biodiverse native flora in any system we employ to produce our foodstuffs. On sloping land, native grasses would halt the water flows that cause washouts and soil erosion. These grasses would also provide stock feed using crash grazing methods. Deep rooted eucalypts growing in the discharge areas should provide their worth in the management of salinity.