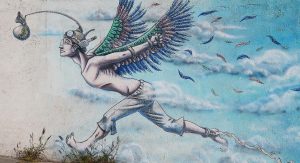 Photo by Arie Wubben on Unsplash

For the first time in over 100 years the population of Australia is declining. The main reason for our past population increasing has been immigration, which has now effectively stopped. This has caused some concern amongst a few economists and politicians who have relied on ever more people to drive economic growth. It has been a very lazy way of managing an economy.

Many countries (including Japan and Norway) have a static or declining populations, and are managing very successfully. An ever expanding economy invariably benefits a few much more than the majority and causes greater stress on the environment. COVID-19 has shown that we can be a more caring and cooperative society and less self-centred if we choose.

Too often we think of the future in terms of an extension of what exists today; whereas the future is something we choose to create and now is a good time to make new better choices for ourselves and society. The economy measures everything that has a dollar value and ignores everything that has intrinsic value such as fresh air, health, happiness, social well-being, quality of education, strength of relationships, wisdom of decision making – all the things that make our lives really worthwhile.

Dr H C ‘Nugget’ Coombs was a noted Australian economist and Reserve Bank Governor from 1966 to 1968. In a landmark lecture in 1971 (Matching Ecological and Economic Realities), he said ‘the worship of economic growth is a sophisticated form of cargo cult’. He called for stabilising populations at an ecologically safe level, for using resources wisely and only using those able to be perpetually renewed or perfectly recycled, and for emitting waste only within the capacity of the environment to absorb it.

He said: It is not sufficient to tinker; we must comprehend the effect of what we do on the system as a whole.

If only we had taken more notice of such wisdom 50 years ago. He identified the problems we still face and provided us with the economic and environmental solutions that we keep ignoring at our peril.

Instead of being obsessed with ‘economic growth’ we could be focusing on growth of sustainable technologies, creativity, entrepreneurship and the things that make our lives healthier and happier. Consider our quality of life rather than the quantity of stuff we consume and throw away.